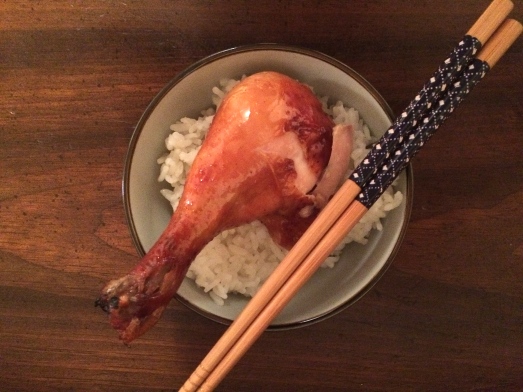 This is a post for #LetsLunch, a monthly (sometimes) virtual potluck on Twitter.  This month’s theme is BEER, in honor of Oktoberfest.

This is a version of a recipe that I associate with my mother, which is strange given that one sip of beer would be enough to give her a fit of giggles.  I think of this chicken as being something she used to make regularly, but when I asked her about it recently, she didn’t recall making this more than once or twice, and that was more than 20 years ago.   In fact, as I thought more about this recipe, I remember some not-so-positive associations.  There was a period in the 90s when my parents lived in Omaha, Nebraska.  It was a great job opportunity for my father, but it was one of the times in my life where I recall having felt the most “other.”  I could feel people’s gazes on my family everywhere we went, and often people would ask us directly (though kindly), where we were from, and were not quite satisfied with the answer of “Long Island.”  Getting to the point, I think the last time my mother made this chicken was at a work party we hosted at my parents’ house, one summer when I was home from school.  The wife of one of my dad’s colleagues pointed at the chicken, complimenting it, and asked what was in it.  My mother answered, “That’s beer-marinated chicken.”  But because of my mother’s slight accent, the wife heard, “veal-marinated chicken,” and gave the same disbelieving look as when we answered the “where are you from?” question, only this time accented with laughter.   I remember watching this woman ask my mother how you marinate a chicken in veal, and my mother’s frustration and embarrassment when she was unable to make herself understood.  I felt so angry.  So I guess that’s why this recipe, though delicious, faded away.

That said, it’s a lovely and easy marinade that makes for a roast chicken that is reminiscent of the soy-marinated poultry you see hanging in the windows of Chinese barbecue shops, and also has flavors in common with teriyaki and Chinese 3-cup chicken.  It’s more intriguing than any of these more common flavors, even a little bit caramelly from the beer plus brown sugar.  I’m looking forward to making this for my mom sometime soon– my resurrected version of this recipe is too good to be banished by bad memories.  My parents live far from Omaha now, and I think that’s just as well.

Allow to rest for 10 minutes before carving and serving.  Tastes wonderful over a bowl of rice, served with an icy cold beer.