One of the highlights of our trip was a day trip exploring the High Atlas Mountains.  Our last stop was in the valley of Asni, where we had a traditional Moroccan lunch prepared by a local woman named Habiba.  In her humble mud brick home, whose still simple kitchen had been upgraded by her association with our tour company, Arib Voyages, she prepared the best meal we had in Morocco.

We began with a salade Marocaine, similar really to Mexican pico de gallo, with tomatoes, onions and cilantro, and a touch of spices.  It was served with local olives and Moroccan flatbread, prepared in her clay oven. All of the ingredients were grown on her family’s land, including the wheat for the bread and all of the vegetables. 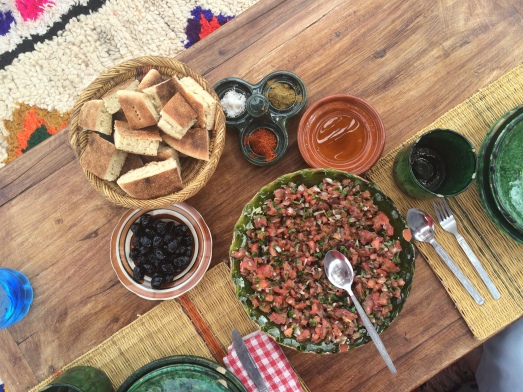 The next course was chicken tagine and the piece de résistance, handrolled couscous topped with root vegetables.

The couscous was steamed in this couscousiere:

And the tagine was slow cooked in the traditional fashion, over coals.

We dined like royals, sitting on large cushions over a handloomed Berber rug.  We had a  stunning view of the surrounding houses and mountains, and enjoyed a peace punctuated only by roosters crowing. 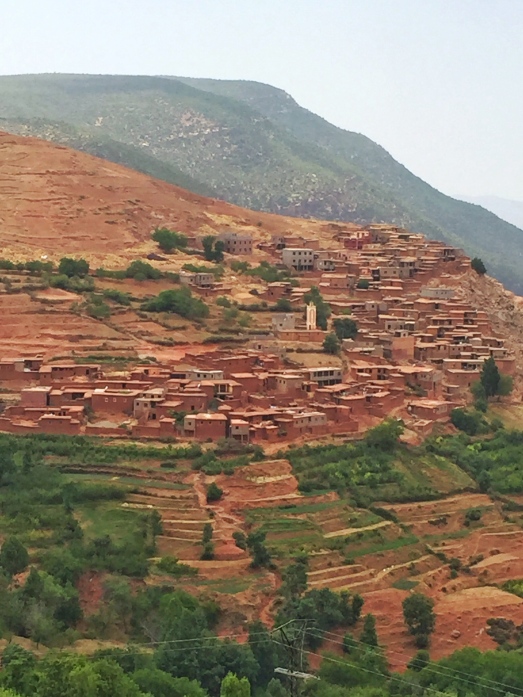 When we had had enough to eat, the table was cleared and Habiba brought us a light dessert to finish.  There was Moroccan mint tea, of course, and some local melon.  What look like almonds in the bowl below are actually slightly sweet biscuits made in the shape of almonds.

For best results, you want to make this in a clay tagine, now easily available at Cost Plus World Market.  But if you don’t have one, you can use an enameled cast iron pot such as Le Creuset, big enough for braising.

Tagines are stews which are prepared similar to braises, except that the meat is not browned, and all of the ingredients, meat or fish plus vegetables and spices, are added at the same time.

1 tablespoon each of chopped flat-leaf parsley and cilantro

Pulp of a half of a preserved lemon

Merci and shokran for coming by! I hope you enjoyed this taste of Morocco.  More coming soon, and please also scroll back for earlier posts from my trip.