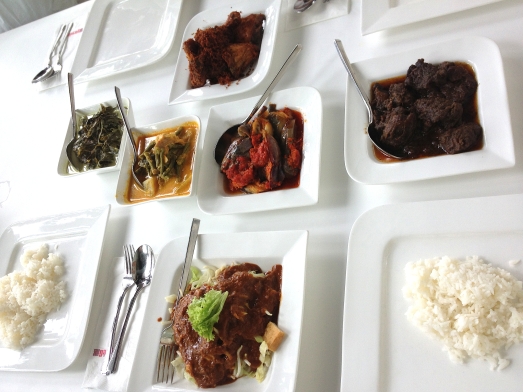 I recently accompanied my husband on a whirlwind trip to Singapore. He was going for work, and when I realized that my parents would be visiting us at the same time and therefore available to spend some one-on-one time with their grandchildren, we seized upon the opportunity for me to come along.  It had been 20 years since my semester abroad at the National University of Singapore (NUS), and I had some old friends I wanted to catch up with.  If you were expecting something along the lines of Eat, Pray, Love, you’ll be disappointed.  While The New York Times recently included Singapore in its lineup of “46 Places to Go in 2013” (including my photo of nasi padang, above!), the kind of adventuring most people do there stops at the “Eat.”  Yes, Singapore is known for being a nation of epicures.  It also didn’t hurt that I visited during the week preceding the Lunar New Year, and lots of special food was being prepared for celebrations. 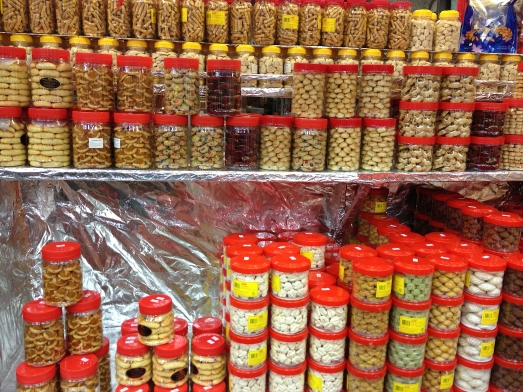 In the weeks before I was set to go, my Singaporean friends, including my Twitter #LetsLunch pal Cheryl Tan, generously arranged a non-stop eating itinerary for me.  I was there for a total of 2 days, and without exaggeration  I can tell you that every single one of my meals was spoken for. Moreover, we were all disappointed that there wasn’t time for more chances to makan (eat)!  I had a lot of old favorites, including roti paratha (but not all! No laksa, hokkien mee, chee cheong fun or char kway teow! What was I doing??). 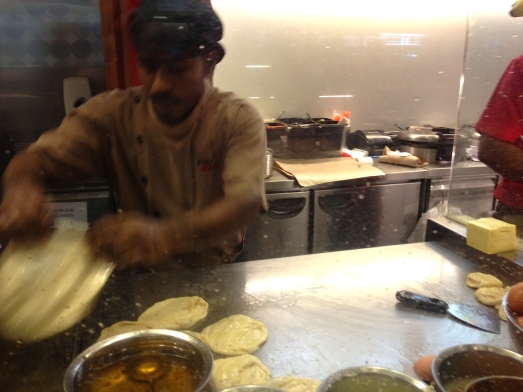 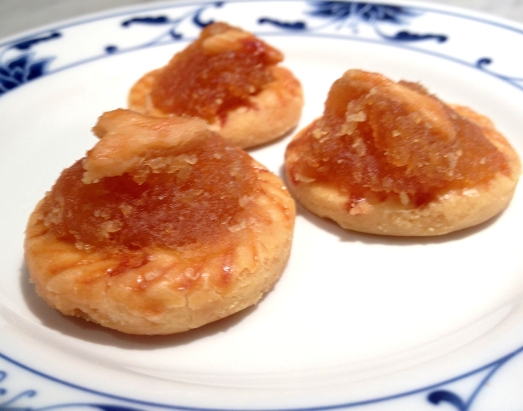 The other new taste I had was buah keluak, the black nuts or seeds indigenous to Indonesia, Malaysia and Papua New Guinea.  Cheryl insisted I try that dish at Immigrants, the Peranakan gastropub she recently reviewed in The New York Times.  Peranakan or Nonya food derives from the cultural melange of Chinese and Malays in Singapore and Malaysia, and is only found in authentic form in this part of the world.   I was temporarily disappointed on my visit (within hours of touchtown to Singapore’s Changi Airport) to see that Immigrants’ usual menu had been temporarily replaced with a special Chinese New Year menu.   I was relieved to find that buah keluak was still featured.  In fact, it was available in more concentrated form—the dish we had featured a puree of the nuts without any other protein, while it’s usually cooked with chicken or pork.  Another highlight was ayam sioh, chicken stewed in a tamarind-based sauce. 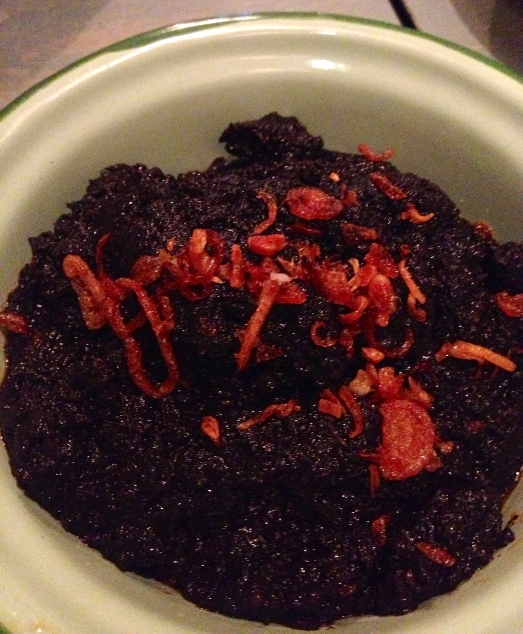 I also enjoyed revisiting the varied tastes of Nasi Padang, the Indonesian meal of assorted cooked dishes served with rice.  We had it old-style at Sabar Menanti Nasi Padang, where I saw an autographed photo of Anthony Bourdain from when he had visited.  It is a simple place in an old Chinese shophouse with the skyscrapers of the financial district behind it.  Its interior features a glass case showcasing a wide array of cooked Indonesian dishes, from which you can make a selection to have plated with your bowl of rice.  If you’re on a rushed eating itinerary like I was, it’s a good and fast way to sample the tastes of lemongrass, chiles, turmeric, curry and coconut in various combinations. 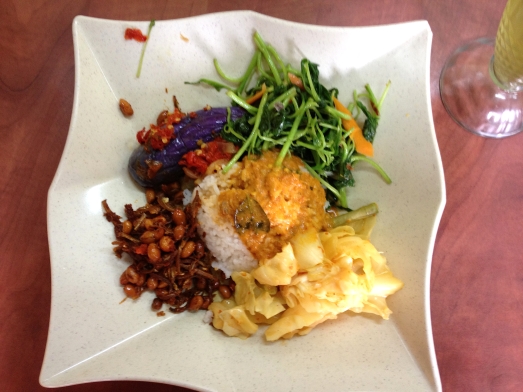 Later, I met with my old hostel-mates (dormmates) from NUS to have nasi padang a second time in 24 hours for lunch in modern new surroundings at Garuda Padang restaurant in Orchard Central, where I also had an extremely refereshing lemongrass drink. 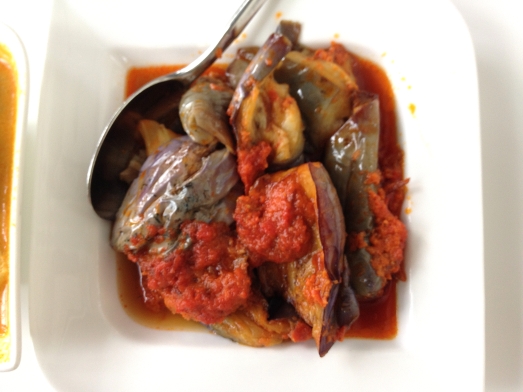 I was so caught up in eating that you wouldn’t be surprised if I had failed to notice my surroundings.  In a rare break from eating, I did get a chance to see a temporary exhibit of ethereal iron sculptures by Zadok Ben-David at the lovely Singapore Botanic Gardens.  That’s been one of my favorite spots in Singapore since my first visit.

But beyond the tranquil gardens, I noticed that Singapore has gotten very crowded.  The newspapers during my stay were abuzz with the government’s recently announced proposal to deliberately grow the population from its current 5.3 million to 6.9 million by the year 2030.   This, despite Singapore already being the third-most densely populated country in the world.  That’s an average increase of 100,000 people per year! I couldn’t imagine where they’d all fit in this city-state, which is 1/6 the size of Rhode Island.  The streets, malls,and public transport were all packed to the gills.   But of course, being the good planners they have always been, the government has a plan in mind— developing offshore islands  off its Southern coast.  If they’re anything like the beautiful islands in neighboring Malaysia—Pulau Tioman , Perhentian and Langkawi come into lovely and hazy focus in my mind—I could be convinced to move back.  Because where else could I spend every moment of every day eating while simultaneously planning my next meal, and not be considered a glutton?