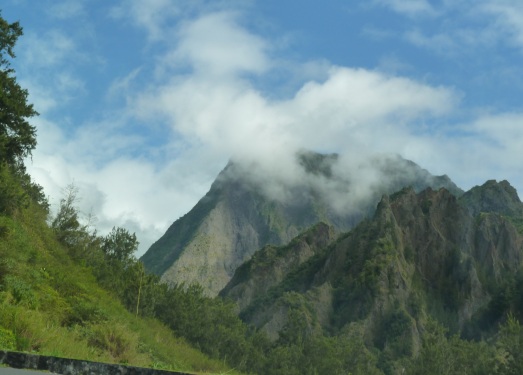 This is the seventh post in a series on the French-themed trip I took this summer.  In this post, I’m bringing you back to Réunion, the French island colony in the Indian Ocean, where I tried French-influenced Indian cuisine. In case you missed them, read my earlier posts on how I became such a Francophile, come along on a Parisian food tour inspired by David Lebovitz, see me try out his recipe for pain d’épices au chocolat, read my homage to lovely Montmartre, and see the Space Invaders in Paris and the street art of Belleville.

What’s in a name? A lot, if you are speaking about French cuisine.  The French created the concept of terroir, that the geography, climate and soil of an area bestow products grown in that region with unique qualities.  From this, the French developed Appellation d’origine contrôlée (AOC), which trademarks eponymous products.  The origins of AOC date back to the 15th century, when the name of Roquefort cheese was regulated by a parliamentary decree.  Other familiar AOC products include Champagne, Burgundy, Cotes de Rhone, and Lentilles de Puy.

Today I’m bringing you back to Réunion, the French colony (officially a Département Français d’ Outre-Mer, or DOM) in the Indian Ocean.  In my first post on Réunion, I was impressed by the Indo-French culinary fusion found on this multicultural island.    In contrast, today’s recipe is a classic French-style gratin using local produce.  The vegetable is chouchou, which is grown in one specific area on the island, the Cirque de Salazie.

If you are wondering, as I was, what a cirque is, let’s talk a little geology.  One of the most striking geographical features of this volcanic island are its cirques, or calderas, which are dramatic geologic formations of sheer mountain walls surrounding a deep amphitheater created after the collapse of land after a volcanic eruption.  Three cirques form the interior of Réunion, both physically and culturally.  The Cirques were first inhabited in the 18th century by runaway slaves (marrons) who escaped their French masters to establish villages deep in the interior.  Each Cirque has its own personality and, as a mark of the French culture, has a specialty product, as on the French mainland with its various AOC products.  Cirque de Cilaos is known for its hot springs and produces the island’s eponymous bottled spring water.   It is also known for growing lentils and more recently, producing white and rosé wines.  Cirque de Mafate is accessible only by foot and is a hiker’s paradise.  And the third, Cirque de Salazie, is known for growing chouchou.  Confused? Some of you may know the word “Chouchou” as a French endearment meaning “darling,” but  it also refers to the pear-shaped fruit (eaten as a vegetable) which has many names including Christophene (France and Caribbean), choko  (Australia and New Zealand), chayote (Americas) and mirliton (Louisiana).  It is native to the tropical parts of the Americas where it is beloved and commonly eaten. 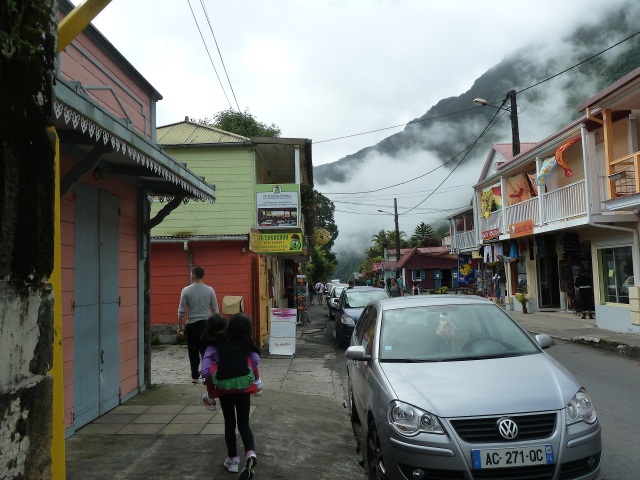 The Réunionnais love their chouchou.  While there is not yet an AOC designation for Chouchou de Réunion, you’ll find it in homes and on restaurant menus all over the island.  On Rue Général de Gaulle, the Gallic in name but island in flavor main drag of the town of Hell-bourg in Cirque de Salazie, the few cafes and restaurants all serve chouchou.  It is served many ways– in gratins, salads, and even in a sweet gateau.  We stopped for lunch in a tiny cafe, Le P’tit Koin Kréol, where it was one of the few entrées being served that day, in a gratin.  Slices of chouchou are baked in Béchamel and topped with cheese (and sometimes breadcrumbs for texture).  While my husband and I loved the spicy local curries smoked meat or fish dishes that form the larger part of Réunionnais cuisine, gratins of chouchou or hearts of palm were the mild and creamy standbys our kids came to rely on.

Back home in California, I had no problem locating this fruit in either the bodega down the street or our local Safeway.  I just needed to know the name to search for: chayote.

salt and pepper to taste

3.  toss prepared vegetables with seasonings and then scatter bacon bacon pieces into a covered casserole dish.  Set aside.

3. Make the Béchamel sauce.  Melt butter in a sauce pan and then whisk in flour.  Cook over low heat until golden.

4.  Slowly whisk in heated milk and stir until smooth.  Simmer over low heat for 5-10 minutes until velvety.

6.  Sprinkle grated cheese over the top of the gratin.

From Shakespeare’s Romeo and Juliet:

‘Tis but thy name that is my enemy; Thou art thyself, though not a Montague. What’s Montague? it is nor hand, nor foot, Nor arm, nor face, nor any other part Belonging to a man. O, be some other name! What’s in a name? that which we call a rose By any other name would smell as sweet; So Romeo would, were he not Romeo call’d, Retain that dear perfection which he owes Without that title. Romeo, doff thy name, And for that name which is no part of thee Take all myself.