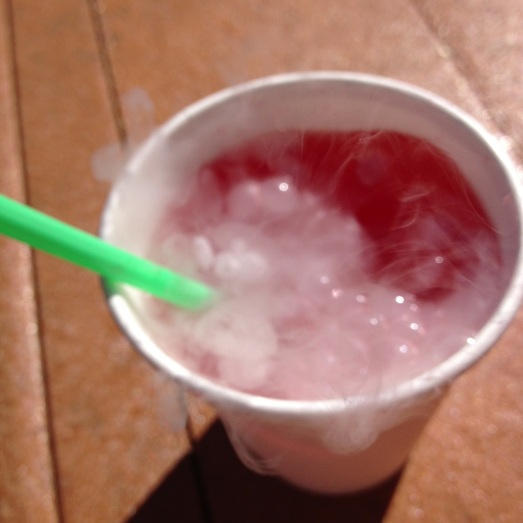 Dear SpiceboxTravels friends, Happy Halloween! If the magical brew in the photo looks familiar, it’s because this is a repost from last Halloween.  While my kids might change their minds a dozen times about what they want to be for Halloween, I’m glad to reshare my bag of tricks for Halloween recipes.  See a full list at the end of this post.

So what is this swirling brew? Pretty scary looking isn’t, all bubbling and smoky? It’s called a Volcano Drink, and it was served at my kids’ school Halloween carnival over the weekend.  Even scarier than it looks are the ingredients: Kool-Aid or soda with a few cubes of dry ice! Cool to look at, but kids were dispensed the brew with the warning of, “don’t let the dry ice touch your lips.”  Thank goodness, no casualties, as far as I’ve heard.

For some more innocent (maybe) Halloween trickery, here’s a true tale from a few Halloweens ago.  The little delinquent is a few years older now, but I wouldn’t put it past her to find herself in the same predicament.  Enjoy.

I blame it on the full moon. My husband was traveling. I was rushing to pick up the kids from childcare. My cell phone rang. I picked it up, thinking it was my husband calling to tell me he had arrived safely. It was not. It was that dreaded call, which is any call from school, that gets my heart racing. At least, after identifying herself, the childcare director reassured me, “It’s not an emergency.”
“OK,” I said. “I am actually in the car on the way, driving on the highway.”

Normally, that would have been enough to get a response like, “Alright, we’ll talk when you get here.” Instead, I was uncharacteristically sternly told of what my 5 year old had done wrong. My little 5 year old Delinquent.

Apparently, my Delinquent, emboldened by two equally bold compatriots at school, whom I will refer to as Twin #1 and Ringleader, slipped away for who knows how many minutes, out of sight of the childcare teachers into the FORBIDDEN teachers lounge and hid away, eating the FORBIDDEN teachers’ Halloween candy! The word used was “stolen.”

I began by apologizing but by also thinking, well, everyone makes a mistake once.

“And it’s not the first time Delinquent has done something like this. There was that time she went outside to the front of the school to play with the Other Twin.”

“Sorry,” I said again, this time not using the word to apologize, but to say EXCUSE ME?? “I was never told about that.”

I finally get to the school, not enraged, but needing to find out what happened. Only Delinquent and Ringleader were still there, so I brought Delinquent over to Ringleader, holding her hand, and asked both of them, “Who would like to tell me what happened?”

And I see it- an expression I recognize from Delinquent’s face, but this time on Ringleader’s face: the one that says, “I am so cute, I can get away with anything, right?” Cute on one’s own child’s face, downright frightening on someone else’s.

I decide to focus on my own Delinquent (“D”).

Me: “Tell me three reasons why what you did was wrong.” (I am operating on the principle that learning is best accomplished by coming up with the answer on one’s own.)

Me: “What was wrong with what you did?”

Me: “Yes, that is the same thing. That means it is dangerous to go in the teacher’s lounge, which is why it is off limits. Tell me two other things.”

D: “I don’t understand what you are asking!”

I decide my Socratic method is not working.

Me: “The three things are: it’s dangerous, it is off-limits, and you STOLE something that did not belong to you!”

She looks at me blankly.

Me: “So that means, you need to give away all of your Halloween candy back to the teachers, to say you are sorry.”

Me: “OK, I will let you keep two pieces that I will give back to you in two weeks, if you learn your lesson.”

Me: “What were the three things I just told you?

Today, I said, “OK, pick out the two pieces of candy that you will get in two weeks, if you continue to behave.”

Me: “No, we already said that it would be in two weeks.”

Time is too abstract. Candy is concrete. I am hoping that this punishment fits the crime, but who knows, two weeks from now, I may even forget the three reasons why what she did was wrong.

Check out some of my Halloween and post-Halloween (including Day of the Dead) favorite recipes.

Mexican Spiced Pumpkin Flan, for Day of the Dead

Upcycled Halloween Candy Blondies (use up your extra Halloween candy!)

Thanks for coming by! Please leave a comment and/or pass this on to your friends if you enjoyed this post.  And feel free to share a link to your favorite Halloween recipe.