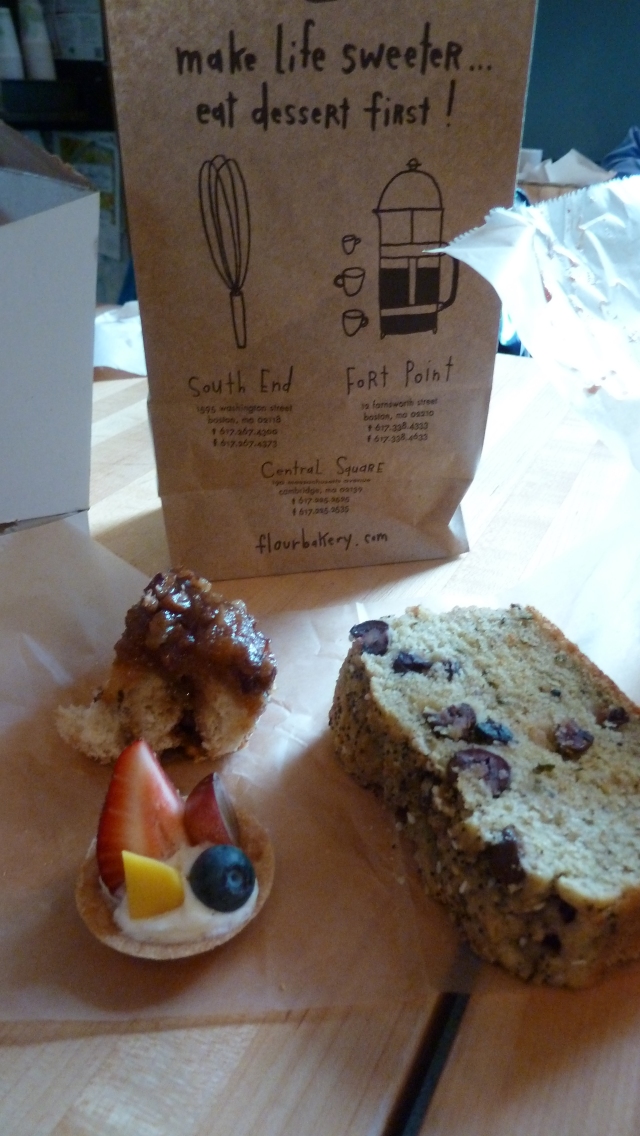 During my college years in Providence, my friends and I would make the 1 hour journey to Boston whenever we craved a little more urban excitement. Now almost twenty years later, our family took a recent trip back. It was a quick (and unseasonably cold and rainy) trip, but we managed to enjoy some fabulous meals while we were there, including 3 of Eater Boston’s Eater 38. All of these places have terrific food and happened to be kid-friendly (though none serve kids’ menus, which earns bonus points from me—a pet peeve). 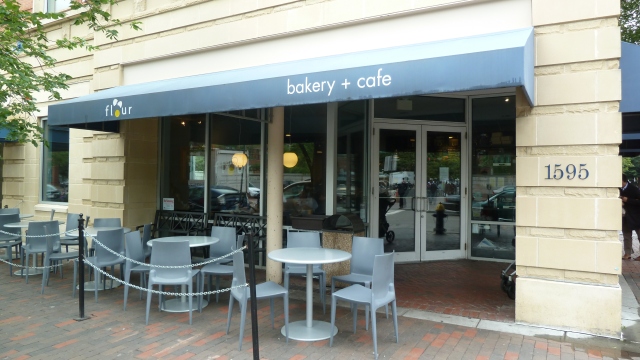 We splurged on the cab fare twice to get to the South End to have breakfast at Flour, Joanne Chang’s mini-empire of wonderful bakeries. This is not a place to look for fancy patisserie, but rather to kind of home-baked fare you wish you could make. Think moist and gooey (but not treacly sweet) sticky buns, an interesting selection of quick breads (including my favorite, rosemary-olive), and both sweet and savory scones. Other must tries include homemade oreos (so much better than the original) and a lime-glazed cornmeal cookie. Back at home now I am going to be cracking open the Flour cookbook to recreate some of our favorites, but also know where we’ll be getting breakfast on our next trip. 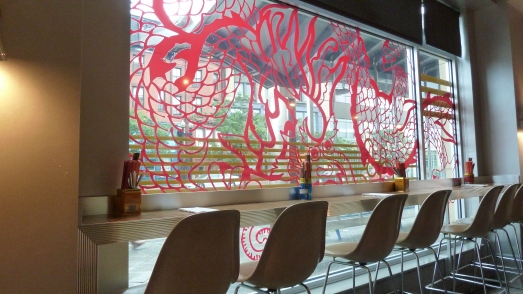 Admittedly only a few hours after we had a little bit of this, a little bit of that at Flour, we walked five or so blocks down Washington St. to meet friends for lunch at Joanne Chang’s other restaurant, Myers + Chang. (We found this through Eater Boston’s Eater 38). This is a whimsical and creative little place which serves completely different fare from the all-American baked goods at Flour. The restaurant describes itself as being influenced by Taiwanese and Thai street food. On weekends, it serves a dim sum (small plates) menu, and this was lucky timing for us as it meant we got to try out much of the menu.

Our favorites included miso-glazed roasted carrots, pork belly buns, and a take on Indonesian nasi goreng (fried rice). Some bites were a little less inspiring, including sesame sugar snap peas and deep fried potstickers.  But we loved the friendly, relaxed service and the retro-chic diner-meets-Chinese-restaurant decor. 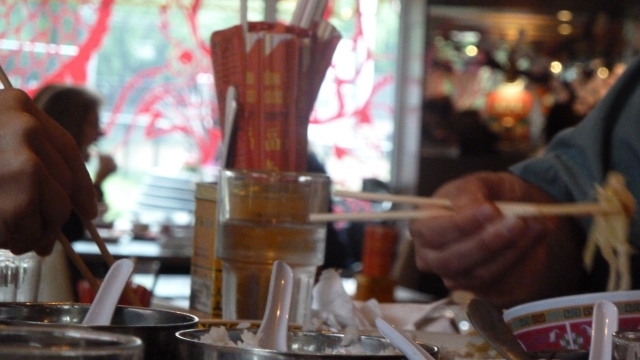 We were thrilled by our desserts, traditionally a weak point of Asian eateries.  We tried an orange granita-vanilla parfait temptation that was reminiscent of creamsicles, and a coconut custard pie with lime infused whipped cream. 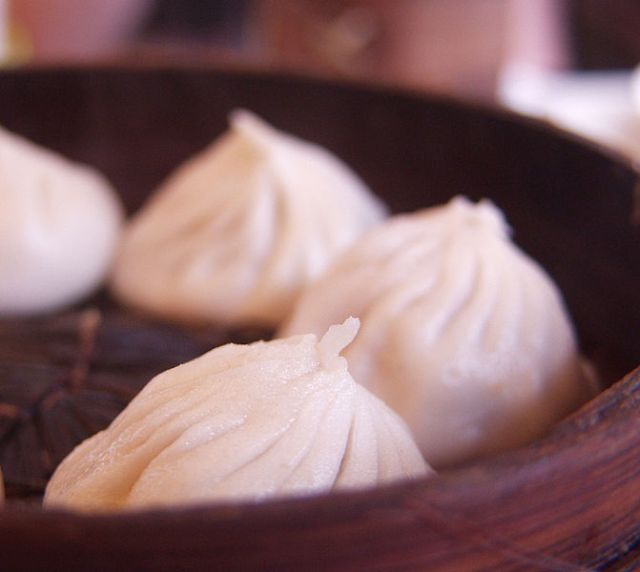 We’re planning to visit my parents in Taiwan later this summer, so you would think I could resist the temptation to have Taiwanese food on American soil until then. (Most previous visits to places serving Taiwanese food have ended in disappointment.) But when I saw Dumpling Café listed on Eater’s 38, I needed to take a closer look. Local guides informed that one of the co-owners was previously a chef at Taipei’s esteemed Grand Hotel. Reviewers described Dumpling Café’s xiaolong bao (Shanghainese soup dumplings, or known here as XLB, which is fun) as the best in Boston, which was hard to resist. A look at the menu online revealed the classic Taiwanese Beef Noodle soup and oyster omelette. We had to go (and I am getting hungry again just thinking about this). It’s a simple little restaurant on the main drag of Boston’s Chinatown, a block from the T stop. Patrons were mainly Asian, which truly is a sign you can trust when evaluating Asian restaurants on foreign soil, mixed with backpacker types guzzling large quantities of Tsingtao Beer (hey, where’s the Taiwan Beer?). The food, while not the best Taiwanese food I’ve ever had (my mom’s and Taiwan’s claiming that title), was authentic and satisfying. The xiaolong bao were delicate and tasty (eat with your soup spoon to capture the broth). The beef noodle soup had great handmade noodles, and the beef was tender, but the broth was just OK. The oyster omelette  is a Taiwanese favorite that bears the cultural imprint of its previous Japanese and Portuguese colonizers with a hard-to-imagine amalgam of egg, mochi (glutinous rice), fresh local oysters, and a ketchup-based sauce. Dumpling Café’s version was authentic and wonderful.  We were too full to sample the bubble tea menu for dessert and were satisfied with the cold, sweet orange wedges that came with the check. Service was brusque, but reasonably friendly. 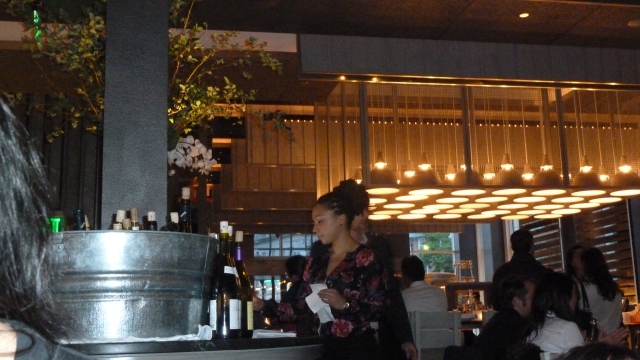 My husband had a hankering for local seafood, but I wanted to try something a little more original than the tried-and-true (and ever expanding) chain of Legal Seafoods. So glad to discover our third and best find off of the Eater 38, Island Creek Oyster Bar. It’s nestled in a genteel brick building, the Hotel Commonwealth, but also steps away from Fenway. Besides its incongruous setting, it also manages to be modern yet seaport-rustic, and delivers definitively creative, fresh, spot on cooking. The setting takes advantage of soaring ceilings, with some walls softened by the brilliant use of wire lobster cages filled with oyster shells and others by weathered wood crates. It’s a big place with a young crowd, especially at the bar area, which takes up the front third of the restaurant, but the tables in back are comfortable. Despite the sophisticated crowd, my kids were welcomed with open arms and crayons and paper.  The menu, like the decor, is modern and inventive. There is a selection of mainly local oysters as well as some Pacific oysters, tasting just-caught fresh. Another not-miss are the oyster sliders, crispy deep fried oysters served on brioche buns, simple and perfect. The clam chowder, smoky with bacon and topped with a cheese biscuit, is rightfully popular. To balance out those rich starters, we had a salad of Bibb lettuce, roasted corn kernels, and thin slices of radish. We also tried one of the most popular entrees, the lobster roe pasta, which is a nod, it seems, to the traditional surf and turf. The fresh pasta has the lobster roe smoothly incorporated into the dough, which lends a very subtle briny richness and color to the pasta. It’s tossed with tender chunks of braised beef short rib meat as well as chunks of lobster, which were not as tender as you’d expect at a seafood restaurant. A dish we enjoyed more were the local sea scallops, perfectly seared and atop a potato and chorizo hash, perhaps a nod to the local Portuguese community. Being tourists, we could not pass up a chance to try the Boston baked beans. They were delicious, molasses rich but not as sweet as they usually are, balanced nicely by a generous amount of salt pork. Again, we left little room for dessert, but were glad that we did. The desserts were superb—the crowd favorite did not disappoint. This is the dark chocolate cremeux ( a dense chocolate mousse served atop a chocolate cookie crust), which is served with a large quenelle of housemade passionfruit sorbet along with white chocolate milk crumble.  The seasonal offering was a moist pound cake served with a strawberry-rhubarb compote and vanilla ice cream laced with streusel. It’s a bustling place, but service was friendly and reasonably efficient.

Open for dinner 7 days a week, plus Sunday brunch 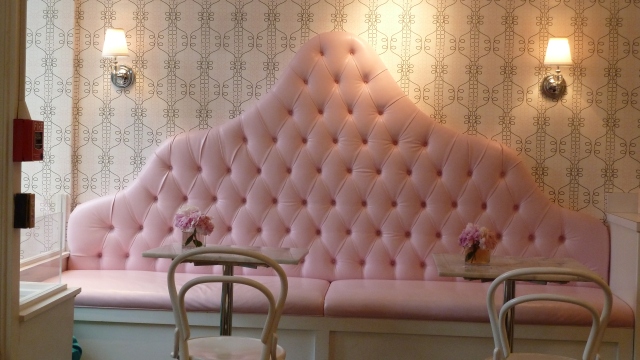 I am kind of over cupcakes, but the kids deserved a little treat after completing the Freedom Trail (well, most) without complaining (too much), and I needed to sit for a while with a cup of tea. And who could resist the girly pink décor as we passed by the location along the Freedom Trail? The glass case had a wide selection of temptations, ranging from Boston Cream Pie to Red Velvet to Banana Split. I was impressed by the availability of icing shots, for those honest enough to admit that that’s what they really want. The banana split cupcake was moist and the banana puree whipped into the sweet cream was lovely. Unfortunately, I found the others we sampled to be cloyingly sweet and somewhat dry. But we enjoyed sitting on the quilted pink pleather banquette and watching the endless crowds of Freedom Trail pilgrims pass by. 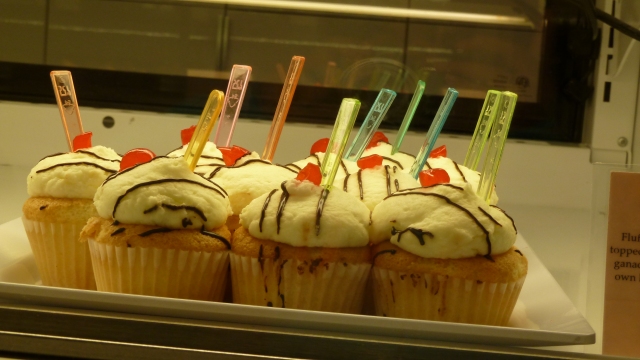