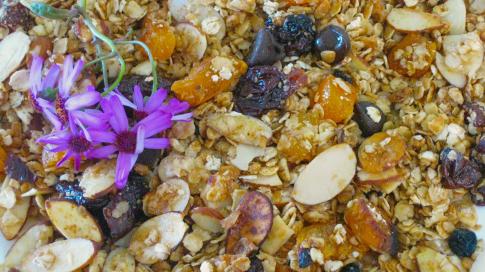 How did a cereal become an adjective?

a mixture typically of rolled oats and various added ingredients (such as brown sugar, raisins, coconut, and nuts) that is eaten especially for breakfast or as a snack.

According to UrbanDictionary.com, which lists fascinating reader-submitted definitions, granola is an adjective:

used to describe people who are environmentally aware (flower child, tree-hugger), open-minded, left-winged, socially aware and active…anti-oppressive/discriminatory (racial, sexual, gender, class, age, etc.) with an organic and natural emphasis on living, who will usually refrain from consuming or using anything containing animals and animal by-products.

I am familiar with granola, both the noun and the adjective. I grew up with hippies. My childhood best friend, Emily, had parents as hippie as they come. I spent a lot of time at Emily’s house playing, and we also had bicycle adventures exploring the woods and picking wildflowers in fields nearby. True to the welcoming and communal nature of hippies, Emily’s family embraced me as one of their own. Of course, I addressed her parents by their first names, something I’d never do to other adults. Roy, the dad, was a gentle man who bore such a striking resemblance to John Lennon that after Lennon was assassinated, I had nightmares for weeks, unable to dissociate the news images from Roy’s very much alive face. Mona was a stay at home mom raising four children. I learned a lot about nutrition from her; she introduced me to kasha (buckwheat), taught me which foods were starches, and explained the benefits of breastfeeding David, the baby, in a time when breast was not considered best. She used cloth diapers. Emily’s aunt, Cindy, had married into the family but was a hippie too. She had no qualms about changing in front of anyone, and I stared in curiosity at her unshaven underarms and hairy legs. This wonderful, open, and loving family fit the classic image of hippies so much that I thought all hippies looked like that.

So much so that I did not realize until I had passed through my own granola phase in college that I, too, had a hippie in my family. My mother looked nothing like those hippies in Emily’s family, but she was, and is, in her soul, a true hippie, just a different flavor of granola.

She didn’t come to the States until her late twenties, when the 60’s were mainly over, but I think she really was meant to have been a Flower Child in 60’s America. Except for the negative associations with grooming, my mother, I have come to realize over the years, is as granola as they come. Her short hair and carefully tweezed eyebrows belie her granola essence.

Most of her granola/hippiness comes to mind with regards to food. She’s as close to vegetarian as you can get, while still eating some meat. She managed to produce quite a bit of homegrown vegetables in our backyard when we were growing up. The garden plot was right next to the clothesline where we dried our clothes most of the year, even if resident birds would sometimes leave their marks on our fresh laundry. She and my dad have such green thumbs that a casual attempt to compost led to a bumper crop of cantaloupe one year. She’s canned the excess peaches from our tree, made juice out of the blackberries spilling onto and staining our patio, and made her own apple cider out of surplus apples that were too bruised to eat. I don’t think I’ve had fruit as sweet since then. We even had a couple of bantam hens in our backyard, and the egg per day they each gave us were silken delights, even though the shells were a pale green from the grass they grazed on in our yard. 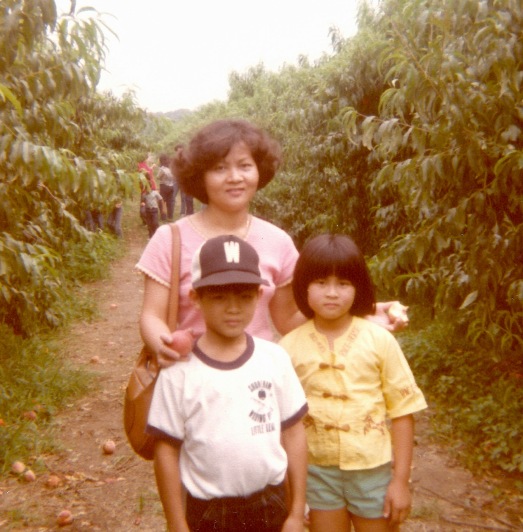 My mother doesn’t use a lot of kitchen gadgets, but she does have one very specialized item, a bean sprouter. She does a lot with soybeans: sprouting them of course, making fresh soy milk, and engaging in soybean subterfuge– we’ve caught her sneaking the remaining soy fiber leftover from pressing soymilk into everything from pancakes to omelets.

Mama embraces natural attitudes in health as well, even when it may conflict with my medical training. She’s stubborn about this, and plies me with nutrition books and dubious spammy looking emails with titles like “The 100 Things Bananas Are Good For. ” She always quizzes me on those emails, to see if I’ve read them, and is miffed if I express skepticism. “You may be a doctor,” she says, “but I know.”

Style wise, she also trends toward hippie. For someone whose workwear was somewhat conservative, she has an awful lot of Birkenstock-type footwear, and her closets are full of floral prints, flowy skirts and corduroy. Some of the first clothes we shared when I was in high school were palazzo pants in wild prints that I bought from street vendors on weekend train trips to Greenwich village.

For leisure, if she’s not out in the garden, you’ll find her walking on a nature trail, not on a treadmill at the gym. She always prefers hoofing it to riding in a car. She can’t pass by a patch of dirt without giving it a quick weeding.

My mama is unintentionally granola, and certainly doesn’t think of herself in that way. I think the long hair and images from Woodstock make her nervous. Superficialities aside, though, she is most granola in her soul: she’s open-minded and generous in her love, and is all about peace.

She’ll be excited to try this granola recipe. Besides being homemade and tasty, it has an ingredient list that is not only low on the food chain but chock full of health benefits. It has oats, which can lower cholesterol and steady your blood sugar; almonds, a good calcium source, for stronger bones, and also high in protein; and dried fruit. It’s difficult to get dried versions of the fruit she’s harvested in our garden, blackberries and cantaloupe, so I am substituting more commonly available dried fruits that are similar in taste, color and nutritional function. All of these fruits are high in antioxidants and vitamin C, and can help prevent heart disease and cancer. Apricots are also an excellent source of fiber, and also of iron, to prevent anemia, great for vegetarians who are looking for a vegetarian iron source other than spinach. If mama made granola, you might find some repurposed soy fiber thrown in for good measure. Instead, I’m throwing in some dark chocolate as an optional special treat, good for you too, as dark chocolate is also rich in antioxidants. This should satisfy her. Enjoy this granola with milk or yogurt for breakfast, or to recreate my mother-daughter time, throw some into a (re-used and reusable) ziploc bag or container, and enjoy on a hike.

Hippie Granola for My Earth Mama

3. Stir together oats, almonds, cinnamon, and salt in a bowl. Set aside.

4. In a small saucepan, combine oil, honey, and sugar. Bring to a boil and remove from heat. Stir in vanilla.

5. Drizzle syrup over oat mixture and toss with a wooden spoon.

6. Pour granola onto a sheet pan and spread evenly. Bake, stirring every 10 minutes so it bakes evenly, until golden (about 25 minutes).

9. Let cool completely and store in an airtight container.

Special bonus: If you want to take the health benefits a step further, make Muesli, which is made of uncooked oats and involves no added fat at all. Muesli can be thought of as uncooked granola, made of uncooked oats, fruit and nuts. It was developed around 1900 by the Swiss physician and nutrition researcher Maximilian Bircher-Benner. He served it in his Zurich hospital/sanatorium, where the treatment involved a diet rich in fresh fruits and vegetables, revolutionary at that time, combined with lots of physical activity. My mother would like his ideas.

Muesli can be freshly prepared using oats that have been soaked in water or fruit juice, from several minutes to overnight. Other ingredients commonly included are additional grated or chopped fresh fruit, such has bananas, apples, berries, dried fruit, milk, cream, yogurt or cottage cheese, cinnamon, ground nuts or seeds, and sweetened with a bit of honey.

The original Bircher-Benner recipe has more fruit than grains. One serving based on the original recipe consists approximately of:

one large apple, preferably a sour variety, finely grated and mixed with the above directly before serving 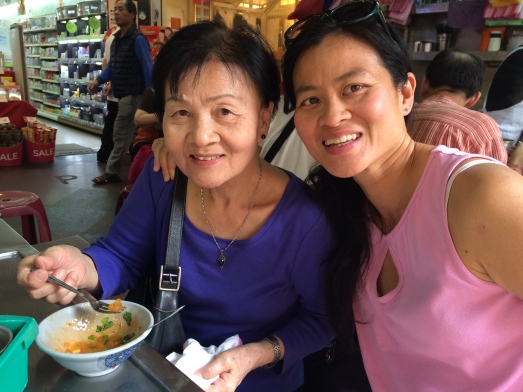 Happy Mother’s Day! Thank you for coming by! Feel free to share favorite cooking memories of your mother in the comments.

You’re invited to join my healthy eating community on Facebook, www.Facebook.com/TheDoctorsSpicebox! And if you’d like to cook with me, visit the Kaiser Permanente San Francisco Health Education webpage for information about the Thrive Kitchen and to register for a class. Registration opens exactly one month before each class.

The next three classes are: